As an attorney based in the U.K., Samuel March is disrupting the centuries-long tradition of barristers wearing wigs made with horsehair. He wants lawyers in the country’s high courts to start donning vegan, hemp-based head coverings instead.

Not only is this a more animal-friendly and environmentally sustainable option, but vegan hemp wigs have a number of other benefits as well. For one, they are much lighter than traditional wigs, making them more comfortable to wear for long periods of time. They also breathe better, meaning that you won’t have to worry about sweating through your wig on hot days.

March first previewed the hemp wigs last year. He said that horsehair wigs that have been standard garb are outdated, and the cannabis-based version could serve as an animal-friendly and more environmentally sustainable vegan alternative to the status quo.

While some may see this as a small change, it is a significant one given the history and tradition of British law. March is hopeful that his fellow lawyers will embrace the vegan hemp wig as an animal-friendly and more environmentally alternative, even with the polemic record UK courts have when it comes to cannabis.

What Are Other Benefits of Using Vegan Hemp Wigs?

As a U.K. lawyer, Samuel March is no stranger to upholding tradition. But when it comes to wigs, he’s shaking things up with an animal-friendly and more environmentally sustainable alternative to horsehair wigs. Hemp is a notoriously tough material so there shouldn’t be any issues with wear and tear, but only 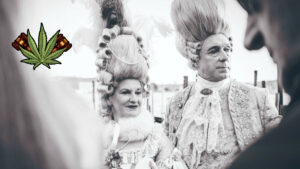 time will tell if this new alternative catches on. In the meantime, U.K. lawyers can take comfort in the knowledge that they’re supporting a more sustainable and humane industry. Currently, the U.K. lawyer is testing the viability of the vegan hemp wig. If successful, this could be a game-changer for the legal community!

Could This Become a Reality Anytime Soon?

As U.K. law currently stands, barristers are required to wear horsehair wigs in court. But U.K. lawyer Samuel March has a better idea: vegan hemp wigs. Not only are they more animal-friendly and environmentally sustainable, but they have a number of other benefits as well. Vegan hemp wigs are much lighter than traditional wigs, making them more comfortable to wear for long periods of time. They also breathe better, meaning that you won’t have to worry about sweating through your wig on hot days. So far, the hemp wig is in the testing phase for interested members, but March hopes it catches on.

Do you think that U.K. lawyers should start wearing vegan hemp wigs? Let us know in the comments!

Please be 21+ because this is about the legal & legitimately lawful (at the state level) cannabis industry.

? We can help with your cannabis business. Get in touch here! (https://bit.ly/3jHLITp)